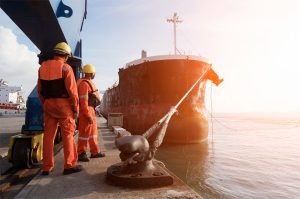 In granting the entry permits, applied for by the AWU, Deputy President Gostencnik considered objections from AREEA and the Australian Building and Construction Commission (ABCC).

On 29 October 2018, the AWU and the CFMMEU entered into an arrangement, known as the ‘Offshore Alliance’, to share and combine resources in relation to organising and representing offshore oil and gas employees in Western Australia. Some of the arrangements between the AWU and the CFMMEU in relation to the Alliance involve 50/50 costs of associated activities and membership dues, nominating at least one organiser from each union who is dual accredited and other infrastructure to advance its industrial and representative interests.

In December 2018 the AWU applied to the Fair Work Commission for right of entry permits for Daniel Cain and Doug Heath, who were said to be AWU organisers. AREEA sought to be heard on the matter of the applications, along with the ABCC, with both permitted to be heard.

AREEA contended that the AWU had not established a true employment relationship with the proposed permit holders and neither of the organisers were fit and proper persons to hold a right of entry permit. AREEA further contended it was questionable that the organisers’ activities and the representations they made to persons wishing to join the Alliance would be limited to the coverage of the organisation to which they were exercising the right of entry.

The ABCC raised an additional concern that if the permits were granted there should be a condition that ensures the right of entry for one organisation did not extend to areas that were not within the coverage of that organisation.

The first key matter considered by DP Gostencnik was whether Mr Heath and Mr Cain were in a genuine employment relationship with the AWU.

He found Mr Cain became a full-time employee of the MUA (now CFMMEU) in April 2011. In December 2012, Mr Cain signed a letter from the AWU purporting to offer him the position of ‘National Organiser (Offshore Oil and Gas)’ and stating he would be a “joint employee of both organisations”.

Mr Heath was found to have commenced as an organiser with the CFMMEU Maritime Division in September 2018. He signed a near identical “offer of employment” from the AWU in November 2018 through which he was also purported to become a National Organiser (Offshore Oil and Gas) with the AWU and a “joint employee of both organisations”.

Until mid-March 2019, both men were found to have been paid a full-time salary by the CFMMEU and were not paid a salary by the AWU, nor were they provide with office accommodation or specified hours of work for AWU duties.

DP Gostencnik found the original letters purporting to be contracts of employment did not provide a sufficient basis for concluding the existence of an employment relationship and appeared to be nothing more than the CFMMEU making available two of its officials to perform work for the AWU.

However, variations made on 22 February 2019 to Mr Cain and Mr Heath’s employment status with the AWU, through which both men began to receive a part-time salary of $24,000 per annum for 10 ordinary hours of work per week, satisfied the Commission that from that date they became part-time employees of the AWU.

“It must be said that I seriously doubt, on the material before me that prior to the purported variations made on 22 February 2019 of the contracts of employment said to exist between the AWU and Messrs Cain and Heath, whether either was in an employment relationship with the AWU,” DP Gostencnik said.

“There is no evidence of any payment of wages by the AWU to either of the proposed permit holders from the commencement of the so-called employment until the variation earlier this year.

“There is no document before me which suggests that either of the proposed permit holders identified themselves as employees or officials of the AWU as opposed to officials of the CFMMEU and sometimes as being associated with the Alliance.

“The purported contractual variations made on 22 February 2019 however, had a material impact on the arrangement. It was in truth an offer of part-time employment by the AWU in respect of which each of Messrs Cain and Heath would be required to perform work for a fixed number of hours per week as organisers in respect of which they would be paid an annual salary of $24,000 plus superannuation.

“Whether or not the parties proceeded upon the mistaken belief that there was already in existence an employment relationship does not change the character of that which has existed since 22 February 2019,” the DP found.

DP Gostencnik found it was not fatal to the application for entry permits that at the time it was made – December 2018 – there was no evidence Mr Cain and Mr Heath were in a genuine employment relationship with the AWU.

Having established that both organisers were now part-time employed by the AWU, and to avoid delay and expense by requiring fresh applications, he said he would deal with the substantive merits of the application.

DP Gostencnik then turned his attention to whether Mr Heath and Mr Cain were fit and proper persons to hold entry permits under the Fair Work Act.

Submissions were considered from both organisers that they understood their responsibilities of exercising a right of entry permit under the Act.

Considering AREEA’s submission, DP Gostencnik accepted the AWU and the CFMMEU had made various “questionable representations” to persons in the offshore oil and gas industry in Western Australia in relation to the Alliance, noting “some are accurate, some are not. A number are just wrong”.

The Deputy President referred to a number of representations through communications in relation to the Alliance that workers can choose which union they belong to and the ability of unions to represent them even where it does not have coverage of those particular workers.

In relation to the application for entry permits, however, DP Gostencnik found these matters did not mean Mr Cain and Mr Heath were not fit and proper persons to hold entry permits.

He found both Mr Cain and Mr Heath were fit and proper persons to hold entry permits and approved their issue.

The decision demonstrates that many of the concerns of employers operating in the offshore resources industry about the legitimacy of the arrangements underpinning these applications and related compliance issues were entirely justified.

Whilst ultimately the Commission granted the entry permits after the AWU varied the arrangements and one of the applications, Deputy President Gostencnik found that when the applications were originally made by the AWU late last year, the CFMMEU officials were most likely not employees of the AWU.

The Commission also identified a number of false statements made in promoting the Alliance concerning eligibility for union membership.  Significantly, in relation to one of the applications, the Commission was also critical of the Secretary of the AWU and the official concerned for not taking more care when completing declarations made in support of the application.

More generally, the CFMEU’s recent takeover of the MUA has brought significant political and community attention to the need for a public interest test within the Fair Work (Registered Organisations) Act 2009 for future union mergers. This test is a key provision of the “Ensuring Integrity Bill” which passed the Lower House of Parliament earlier this month and is currently subject to a Senate Committee Inquiry.

In this context the potential for informal union alliances to be used to circumvent formal requirements under the Fair Work legislation and union coverage rules is a significant issue.

AREEA strongly believes in freedom of association however is equally emphatic about compliance with Australia’s workplace laws including the coverage rules enforced under the Fair Work (Registered Organisation) Act. Informal union arrangements are matters for the unions and their members, but compliance from all parties with their respective rights and obligations is essential.

For more information about this case, other union workplace entry disputes or any other workplace relations matter, contact [email protected]