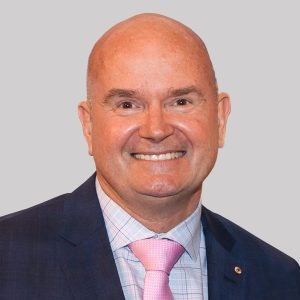 Steve Knott has been AREEA’s Chief Executive since 1997. On behalf of resource employers in Australia, Steve leads AREEA’s workforce lobbying efforts to government, opposition and other relevant stakeholders at state and federal government levels.

Steve is a passionate advocate for employment legislation that gives employers and employees the freedom to enter into productive enterprise-based working arrangements.

Prior to promotion to the Chief Executive role, he served two years as AREEA’s West Australian manager and one year as Tasmanian AREEA manager. Before joining AREEA, he held senior management positions with the Hydro Electric Commission Tasmania.

Steve is a member of the National Workplace Relations Consultative Council, the International Labour Advisory Committee, the Ministerial Advisory Council on Skilled Migration, the Australian Chamber of Commerce and Industry’s General Council, and holds various other representative roles on behalf of AREEA.

He holds a post graduate diploma in business administration from Monash University and has professional memberships with the Australian Institute of Company Directors, the Industrial Relations Society of Victoria, and is also a Fellow of the Australian Human Resources Institute.

In 2017, Steve was appointed a Member in the General Division of the Order of Australia (AM) for “significant service to the resources and energy industries, to the advancement of women, and to industrial relations”.